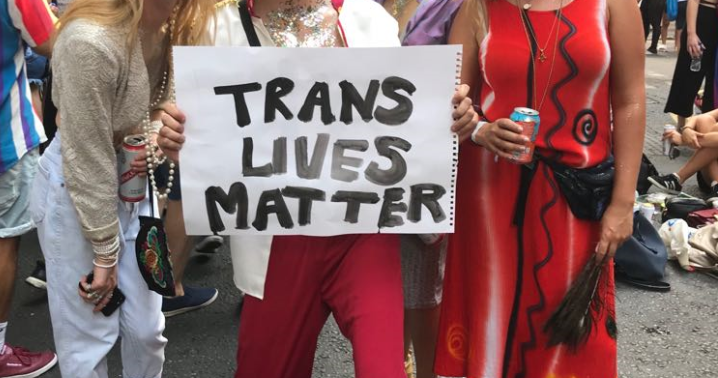 Our response to transphobia at Pride in London

On Saturday, a group of transphobic members of our community were permitted to march at the front of the Pride in London march, to freely hand out their hateful literature without intervention or obstruction. This is absolutely inexcusable. We, the London LGBTQ+ Community Centre project volunteers, completely condemn this disgusting behaviour.

Pride in London said that ‘the actions of 8 people did not stop the joy and love that was demonstrated by the 30,000 people who followed.’ This naive statement overlooks the heartbreak and anger experienced by so many in our community who disagree with the hateful statements on placards and banners marching through our city. Pride in London stood by and allowed this to happen. This seemingly small, careless act has had a severe effect on our community, making many feel unsafe and unwelcome at Pride, and to state anything else is to undermine the seriousness of this issue and the impact it has had.

Pride in London stated that they couldn’t ‘forcibly remove the group as their protest was not a criminal offence’, but section 4 of the Public Order Act 1986 makes it an offence for a person to use threatening, abusive or insulting words or behaviour that causes, or is likely to cause, another person harassment, alarm or distress. We believe that this hateful protest group breached the Public Order Act, and should have been forcibly removed.

The trans community, and trans women in particular, have been subject to extreme amounts of abuse and hatred in recent years, and particularly since the government announced it would move forward on reforming the Gender Recognition Act. In 2018 alone, groups of Trans Exclusionary Radical Feminists (TERFs) have held campaigns and rallies to incite hate against trans people; they have held mass protest walk-outs of major political parties, claiming trans women violate their rights as women; they have raised thousands of pounds to fuel their hate campaigns and they have dominated the media while claiming to be silenced by trans people.  That’s why it’s of absolutely vital importance that as a community, we stand shoulder to shoulder with our trans sisters, and this is why the choice Pride in London made to allow them to march is so unacceptable.

Jo, a volunteer from the London LGBTQ+ Community Centre project team said “As a trans non-binary person, there are no words to describe the level of anger and deep sadness that I hold to the actions of this bigoted group. Irrespective of the actual numbers who protested, the symbolism of Saturday’s action is troubling. To me, it shows the strength of these hateful voices and how pervasive transphobia has become within our community. In terms of the organisation of Pride in London, it shows the disconnect that they have to vulnerable members of our community. This year, there have been serious concerns voiced regarding diversity and commercialisation. By not challenging the group at this year’s pride, it strikingly demonstrates where the priorities of Pride in London lie.”

Molly, who is also a Centre project volunteer, and whose 12 year old son is trans said “When I saw those few angry people at the start of the march I knew for sure they were speaking for a tiny group, and that the sheer weight of mutual solidarity among LGBTQ+ people and allies wouldn’t let something so small and ugly undermine the colourful beautiful pride that then unfolded. But it also made me feel extremely sad- it was a reminder of the magnitude of the struggle trans people face for acceptance and of the visceral and (to me) inexplicable hate they seem to provoke from people like those few at the start of Pride. I’d love them to approach life with a bit more compassion and, objectionable as they are, I stand with them against homophobic abuse and ask them to stand with me and my son against transphobic abuse, so he and others like him can have the free, safe, fun life they deserve.”

We are calling for allies to our trans and non-binary family to speak up, louder than ever before. Use your privilege and platform to drown out hatred, to stand up and let the transphobes know that their behaviour isn’t welcome and will not be tolerated. Our trans and non-binary siblings are unequivocally part of our community, and we must move forward as a movement, united, with love and solidarity.